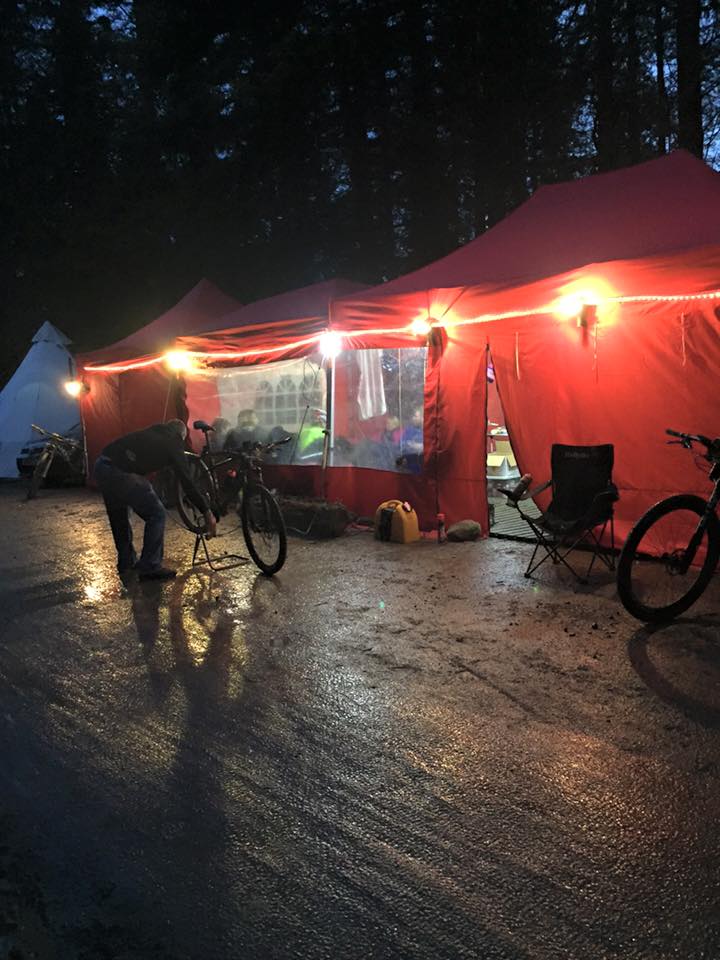 The weekend of 23rd/24th of January saw the 11th running of the wildly acclaimed ‘toughest mountain bike event’ in the UK – The Strathpuffer 24.

Located near Strathpeffer in the Highlands, an approx 7 mile loop, 24 hours of whatever the weather can throw at you with approx 17 hours of darkness makes for a tough shift in the saddle!

The cold, snow and frost running upto the 2016 event was replaced by mild conditions which meant a lot of the course was a mud fest. A bit of mud is fine, 24 hours of it make for a hard ride both on the body and the bike.

In the Quads category, and taking part for the first time and more ‘for the fun of it’ were Gary Wood and some workmates finishing 49th, with Barry McGregors team finishing 24th – well done gents.

The more seasoned ‘puffer’ mountain bikers were Neil Scott and Colin Nicol competing in the solo category, with Andy Kindness and his non ABC partner Wayne Blair replacing Mike Milne who had to pull out due to illness.

The 10am start consists of a ‘lemans’ style run to your bike with the first couple of miles up long fire road climb. The ABC camp was at the top of this first fire road with the first lap tactics of Andy and Wayne being Andy doing the initial run and bike up the hill, to then tag Wayne to do the rest of the lap then back upto the ABC camp where they would swap, and then continue for the duration of the race.

Andy had a storming start, being 2nd rider up the hill giving Wayne a clear track on his first lap. When Wayne appeared after his full lap, ABC were leading the puffer! This first lap being the 2nd quickest lap by anyone over the weekend, only being beaten by a young Scottish cycling prodigy.

This first climb helps thin out the riders before the first single track, which can become a bit of a bottleneck, but both Neil and Colin were well placed despite needing to pace themselves for 24 hours.

And so the ‘cycle’ began of lap upon lap! Neil & Colin would do a couple of laps before stopping for a quick bite to eat/change bottle etc. Both started fantastic, and after the first few laps Neil was placed top 5 solo, with Colin in the top 20.

Andy and Wayne were doing well but lost around 10 minutes on Wayne’s 2nd lap due to his crank arm coming off, leading to a enforced lengthy run to changeover. This let the pairing from Leslie Bike Shop in Fife into the lead which they eaked out to 17 minutes at one stage.

Mechanical issues play a big part in any form of cycling, but 24 hour mountain biking in mud etc contribute to this even more. I’m sure the ABC riders would like to thank the behind the scenes team that keptthem going. Whether that was feeding them, mixing bottles, washing bikes, tweaking bikes etc without them things would be so much harder. Big thanks to Andys wife Elizabeth, Waynes wife Anna, Stewart Irving, Davy Hill and Mike Milne for there own 24 hour Puffer.

Mechanically wise the main issue was the mud resulting in the need for bikes to be washed regularly. In Andy & Wayne’s case this was every lap, with Neil & Colin’s being done whenever they stopped. Thankfully a fast flowing stream was only around 500 yards away for a clean water supply, but with a combined total of 72 laps between them this resulted in a lot of bike washing!

And so the hours ticked on.

Neil was swapping bikes every couple of laps which gave the ‘pit bitches’ time to clean, lube and tweak his between changes.

Colin managed to snap a seat post which got replaced from a bike Mike Milne had, then stripped his front chainring of teeth which nobody had a replacement for, meaning he ended up with only one operational bike!

Approaching 12 hours and Neil was in a 3way battle for 3rd/4th/5th with Colin holding his own well within the top 20.

Andy and Wayne had now caught the LBS pairing and were leading the pairs, but we’re also sitting 3rd overall out of all the 300 odd teams entered with only 2 quad teams ahead of them.

But, the hard work was only now starting! Midnight to daylight are tough, real tough!

Unfortunately Neil hit a low point around 6am, meaning a spell off the bike. Colin was plodding on, learning from his Relentless 24 race experience by stopping regularly for food, and at the same time allowing his bike to be cleaned & lubed.

Andy and Wayne however were just relentlessly battering in the laps, and in the wee small hours lapped the 2nd placed LBS riders, meaning that they had a fantastic time cushion should any drastic mechanical happen during a lap.

As daylight very slowly decided to make an appearance, Neil headed out again for a final lap. Colin was also continuing on his way, and Andy and Wayne just hadn’t let up.

As the 10am finish came and went, all the ABC riders completed the ‘puffer’.

As for Andy & Wayne they finished an amazing 3rd overall, 1st in Pairs with 30 laps and a 1 lap and 32 minute lead over 2nd place.

As our chairman Alex asked us to maintain our reputation as ‘The Most Glamorous Cycling Club in Angus’ I think the 2016 Puffer riders and helpers of ABC have done this in style.