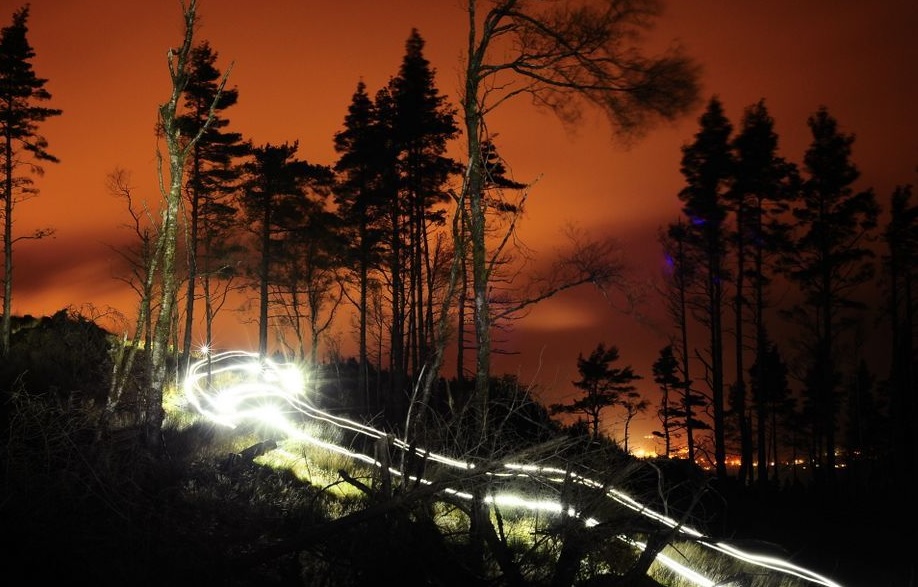 Last weekend was the Relentless 24 UK MTB Champs, hosted by No Fuss at the Outdoor Capital of Scotland at Nevis Range, Fort William.

Using parts of the renowned World Cup XC course the approx. 7 mile lap had over 1000ft of climbing per lap and approx. 14 hours of darkness. Thankfully for once the weather played its part with mild /dry conditions leading to fast laps.

Neil Scott had entered the SS category despite some recent issues with his back which meant his place on the start line was in jeopardy. Despite the less than ideal preparation Neil had an excellent start to the race and was sitting 2nd in the SS category and 11th overall solo when his back packed up again forcing him to retire. If nothing else it was good preparation for his attempt of the Strathpuffer 24 in January 2016, again as a solo SS.

Colin Nicol had also entered the solo category but competing in the Senior Vet category. A solid steady start from Colin meant that approaching the 10 hour mark he was leading his category, but a bit of under fuelling by himself led to a long night (and some time off the bike to recover). He eventually recovered enough to continue and gain a well-deserved 2nd place in category. Again Colin was using the event as a bit of a preparation for his solo Strathpuffer 2016 attempt, so some lessons learned of when/what to eat!

The remaining ABC contingent of Andrew Kindness, Davy Hill, Mike Milne (and non ABC rider Brian Bunch) had entered the Quad Veteran male category. After a great opening lap from Andy and despite a 1stlap puncture for Brian the ABC team were soon well up the leader board, not only in category but also in the overall placings. This meant lap times of low to mid 40 minutes for each lap with all 4 riders setting equally consistent laps with only a few minutes ‘slowing down’ through the tricky dark hours when fatigue was starting to kick in! Constant checking of the results through the night and a battle with our neighbours for overall position meant that a ‘bad lap’ or a mechanical would result in valuable time being lost and a placing or 2 lost on the leader board.

As daylight eventually came in it was looking like the Category win was safe unless of a major catastrophe, but the battle for an overall placing on the leader board was still up for grabs.

However some excellent laps and a slight increase is lap times in daylight meant that the ABC team finished 1st in the Solo Vet Category (3 laps ahead of 2nd place!) meaning a Top step on the podium and an impressive 2nd place overall.

Full details can be found over on the website