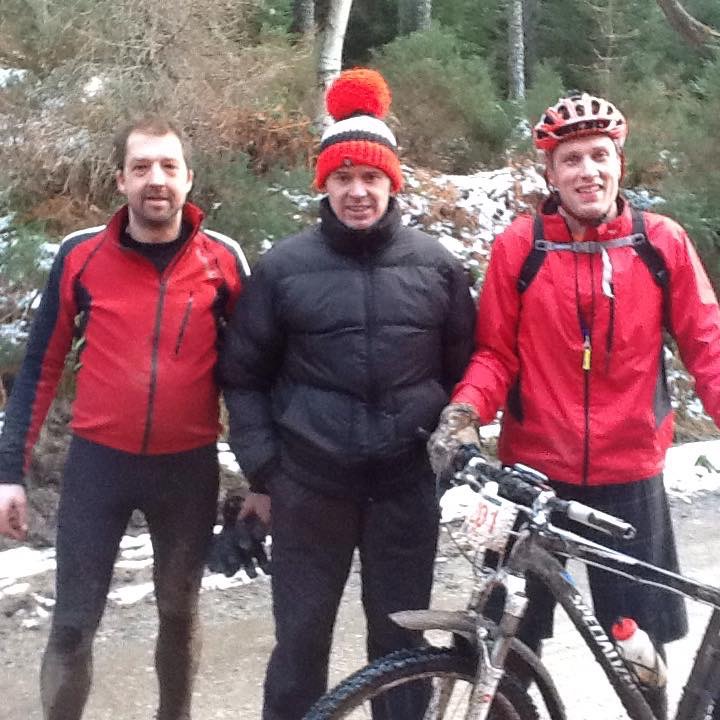 Mid-January in the Scottish Highlands, 17 odd hours of darkness, and

whatever the weather wants to throw at the riders around the approx. 11km

lap have built this reputation, and 2015 certainly added to this!

Upon arrival to set up camp on the Friday, the snow and ice on the course

ice and you soon realise that it’s a long, long way from the Tour de

France!) After a few hours queuing until the campervans ahead of us got

pulled/pushed into place, ABC got set up in a pretty ideal location mid-way

up the main fire road climb.

prep making things a bit more comfortable within the ABC gazebo! It can be a

shorts when the temperature is below zero outside, but the event is tough

enough without overly suffering between laps as well!

madness in a way, but if you have the legs the course/conditions suit a

single speed), and pairs of Andy Kindness and myself (Mike Milne) were ably

Milne keeping us fed and watered – big thanks to the 3 of them!

tagged and I continued off on the 1st lap sitting within the overall top 20,

where I was joined by Neil midway round the 1st lap. The lap is basically a

eventually picking up another fire road, onto a slippy/twisty/muddy single

to a long fast descent all the way to the finish line. However for 2015 a

‘new’ section towards the end of the lap removed the long fast descent,

(which was a bit of a surprise 1st lap!) and added a bit of time and extra

pedalling onto the lap!

Suddenly lap 1 was over, you electronically ‘dib’ at the end of each lap, I

handed the dibber to Andy, Neil continued on and we started the whole

off the snow and ice covered trail. If you’ve never ridden with ice tyres

you’ll not realise how grippy they are, and we wouldn’t have fancied riding

without them but gradually, lap by lap the ‘new’ descent was churning up,

And then all too soon it was dark! This is the proper ‘puffer’. It’s some 17

odd hours until daylight appears again! The course takes on a totally

different feel in the dark. Weird lines appear which you know you shouldn’t

ride, but you do. People seem to disappear during the night, and at times it

feels like you are the only person riding, then in the distance you’ll see

another light and try and chase it down.

Neil was riding fantastic, and appeared to be continually riding with Guy

Martin for a while, sitting comfortably top 5 solo overall. Andy and myself

were plodding in the laps, sitting around 10th pair at around midnight but

sleep and the mind starts to play tricks!

Unfortunately Neil had a minor altercation with another rider during the

night which led to an un-preferred line choice. The subsequent large hole he

had to ride into led to a ‘moment’ and subsequent damage to his hand, which

resulted in a prolonged stop at the end of that lap. However after a

‘discussion’ with the ABC support crew he was soon back on his way, no

places lost, but now with a bit of distance between him and 4th and 6th a

The small hours continued, lap times were getting slower as fatigue took

over, but Neil had maintained 5th, and Andy and myself had moved upto 7th

teams had slowed/taken a break.

with the odd snow shower continuing, but the final descent was now carnage!

Mud/puddles/holes/people crashing and weirdly some bloke at around 3am, in

the middle of no place with a ghetto blaster dancing!

It’s strange around 2-5am. Your body needs food but you can’t face eating!

Your counting down to the 10am finish, and trying to work out how many laps

you have left but basic arithmetic becomes difficult! However as the night

this was my aim before the event!

Neil had continued relentlessly on – eventually finishing with a fantastic